How Can We Help?

If you have experienced equipment damage as a result of purchasing mislabeled “yellow bucket” 303 THF products, we are currently handling a class-action lawsuit on behalf of farmers, ranchers and tractor owners.

Tractor hydraulic fluid mislabeled as “303 THF” causes harm and increased wear and damage to consumers’ equipment. We are currently working with farmers, ranchers and manufacturers to recover financial damages stemming from the deceptive and misleading 303 THF products.

Attorney Bryan White is currently handling a class-action lawsuit on behalf of farmers, ranchers and tractor owners who suffered financial losses due to the mislabeled THF.

Speak with an attorney today to learn if you’ve experienced financial loss from the harmful 303 products. 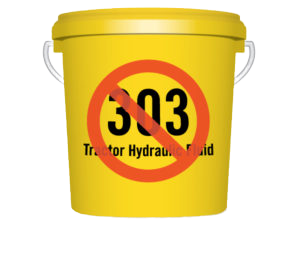 Have you experienced equipment damage as a result of purchasing mislabeled “yellow bucket” 303 THF products?

Tractor hydraulic fluids (THF) are used to lubricate hydraulic systems, brakes, and certain other systems in farming, construction and logging equipment. Prior to

1974, John Deere manufactured and sold a multi-use THF called JD 303. The 303 fluid contained sperm whale oil, which was banned from use in the mid-1970s. As a result, John Deere discontinued production of the 303 fluid and the 303 designation became obsolete. Over the years that followed, John Deere developed and improved on several other specifications for its tractor hydraulic fluids; the current specification is referred to as J20C.

Although the 303 designation has been obsolete for more than 40 years and the original specification is unknown, certain lubricant manufacturers and sellers have been using the old John Deere 303 name and producing and selling THF as 303 in bright yellow buckets at various farm and manufacturing supply stores in Missouri and throughout the United States.

The mislabeled THF often fails to meet any manufacturers’ specifications and is typically made with inferior component products not appropriate for use in a tractor hydraulic fluid. These mislabeled 303 fluids can cause harm, increased wear and damage to consumers’ equipment. In November 2017, the State of Missouri banned the sale of these “yellow bucket” THF products labeled as 303 fluids. White, Graham, Buckley & Carr, L.L.C. was the first to pursue the litigation, which was featured in a Kansas City Business Journal article, Sale of Hydraulic Fluid Spurs Call for Class Action.

Be sure to check out our 303 Tractor Hydraulic Fluid Resource Center, where we’ve shared consumer resources, background on other 303 THF class-action settlements, recall notices and media resources.

Your time to recover any financial losses is limited.

After you contact us, an attorney will follow up to answer questions that you might have. There is no cost or obligation to speak with us, and any information you provide will be kept confidential.

Attorney advertising. This website is designed for general information only. The information presented at this site should not be construed to be formal legal advice nor the formation of a lawyer/client relationship.